About Us & Club History

In the spring of 2009, The Austin 7 Clubs Association published a letter in their quarterly journal from Howard Palmer who lived in S. Devon asking if there were any other A7 owners, resident in the area who might be interested in meeting up. This followed an original attempt, by Murray Park from Torquay in 2008, to get Devon based Bristol A7 Club members together, but his efforts were thwarted by ill health.

In response to Howards letter, contact was made with Murray and a few other A7 owners in S. Devon and it was decided to write to all known Devon based A7 owners to see if there was any support for forming a club in Devon. Many hours were spent by Murray and Howard, searching through the membership lists of Bristol A7 Club, Pre-War A7 Club and the VSCC for members who lived in Devon and they were contacted, along with those people whose names Murray had already collected.

The response to the circular letter was encouraging and an informal meeting was held at The Penn Inn, Newton Abbot on 15th July 2009 at which there were 22 people from all parts of Devon. Consideration was given to either forming a local group of an existing club such as The Pre-War A7 Club or 750 MC or to go it alone and the initial decision was to operate as an unstructured Group of Friends

It must be said that there was a fair bit of scepticism if the club would get off the ground at all, and some concern was also expressed by the established clubs as to whether or not they would lose membership. Despite these doubts, it was agreed to go ahead and to keep everything very simple with most communication by e-mail and SAEs being provided by those people without computers. The name Devon Sevens was adopted as a working title for the group although it was feared at the time that we might get confused with a Seven-a-side Rugby Football organisation!!! Regular meetings at The Penn Inn were organised for the third Monday of each month.

Informal meetings followed in August & September which were attended by more than a dozen members and Murray Park started to compile a schedule of members cars. Sunday 25th October 2009 saw the first Devon Sevens Road Run. Starting from The Penn Inn, the simple route was through Newton Abbot and up the Teign Valley Rd to the Teign House pub for lunch. Another notable event was the first newsletter, published in November 2009,

It is interesting to note that the monthly newsletter continues to the present time, the schedule of members cars has evolved into a very accurate and useful historical record of past & present members cars which is linked in to the World-Wide register held by the A7 Clubs Association, and our Sunday road runs have continued each year, taking members to a wide variety of pubs and restaurants all over the county under the Sunday Saunter title.

By the turn of the year, it was clear that there was growing support for a more structured club in Devon and a meeting was arranged for the 15th Feb 2010 to consider setting up a properly constituted club. All interested parties were invited, including representatives from the Dorset, Bristol & Cornwall Clubs together with some A7 owners who had for many years run on an informal group basis in N. Devon. The records do not show how many people attended but those who were there recall the number to have been around 50. The Devon Austin 7 Club was born at that meeting and the Devon Sevens name was retained for the Newsletter title. A committee was elected with Howard Palmer as Chairman and Bob Downey as Secretary. A successful application for affiliation to the A7Clubs Association was completed after another period of detailed work by Howard and Murray in April 2010 which enabled the club to be an active member of the wider Classic Car movement.

Murray Park unfortunately felt unable to take a committee post due to ill health, but it was undoubtedly his original idea which eventually led to the formation of the club and this was reflected a few months later when he was elected as the clubs Honorary President. His efforts were also acknowledged on the front cover of the first newsletter for the official Devon A7 Club, published in March 2010 and in 2016 an annual Club award was established in his name. 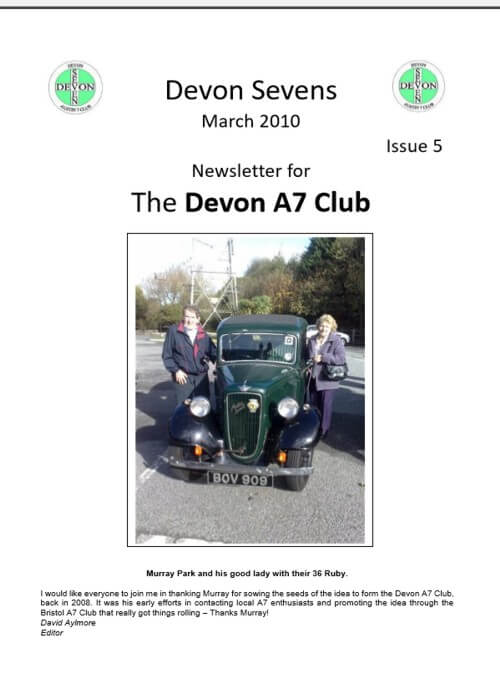 By the end of 2010, about 40 members had joined, paying the £10 annual fee which was considerably less than any other local A7 Club The fee was kept low because of the commitment to communicate by e-mail and not to incur the cost of printing and posting newsletters which other clubs were finding to be an ever-increasing financial burden. Over the years the membership has fluctuated annually with a few people not renewing each year but more and more have joined with the membership standing at 77 in October 2017.

The monthly meetings at The Penn Inn, continued for a while, but as the membership grew from all parts of the county it became obvious that having an evening meeting in S. Devon was excluding more members than it was serving. The decision was made to organise at least one event each month, with venues around the county. This plan continues today and with the regular rise in membership numbers, appears to be popular.

Earlier this year the Club’s Facebook page was re-established and now has an ever growing following, this was supplemented, in September by the resurrection of the Devon Seven website, which like the Facebook page, is an ever increasing source of information and interest.

Thank you for reading this page and if you want to see what the members have been doing recently, have a look through the other pages on the website.