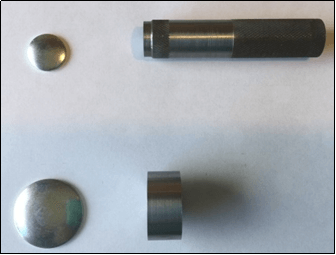 When I broke down in the Ruby the other day, I did contemplate doing the repair on the roadside.  But checking the spares in the car I could not find any core plugs, correct size punch or a hammer! So with Marlies at the wheel of the Austin we headed for home and the garage.  First job was to clean the cylinder head and the seating of any old sealant then to remove the horn so I had enough space to swing a hammer.  Next I looked for a suitable punch but could not find anything in the repair kit of the Special, so onto the lathe.I wanted to turn up a punch which could be used on both sizes of core plug and came up with the idea of making up a two part punch with the larger diameter being bored out to take the main body. I made up two sets, one for each car and ordered up from Tony Leslie at Holmesdale  Sevens two sets of core plugs to be carried at all times! I did examine the core plug that had popped out and found that it was slightly dished downwards. So I had obviously used an undersized punch and too much force which had the effect of reducing the gripping power of the plug. When I machined up the new punches I made sure that I made the diameters of both sizes only a few thou smaller so as one strikes the core plug the seating offers support and there is no chance of dishing the plug and reducing its grip.